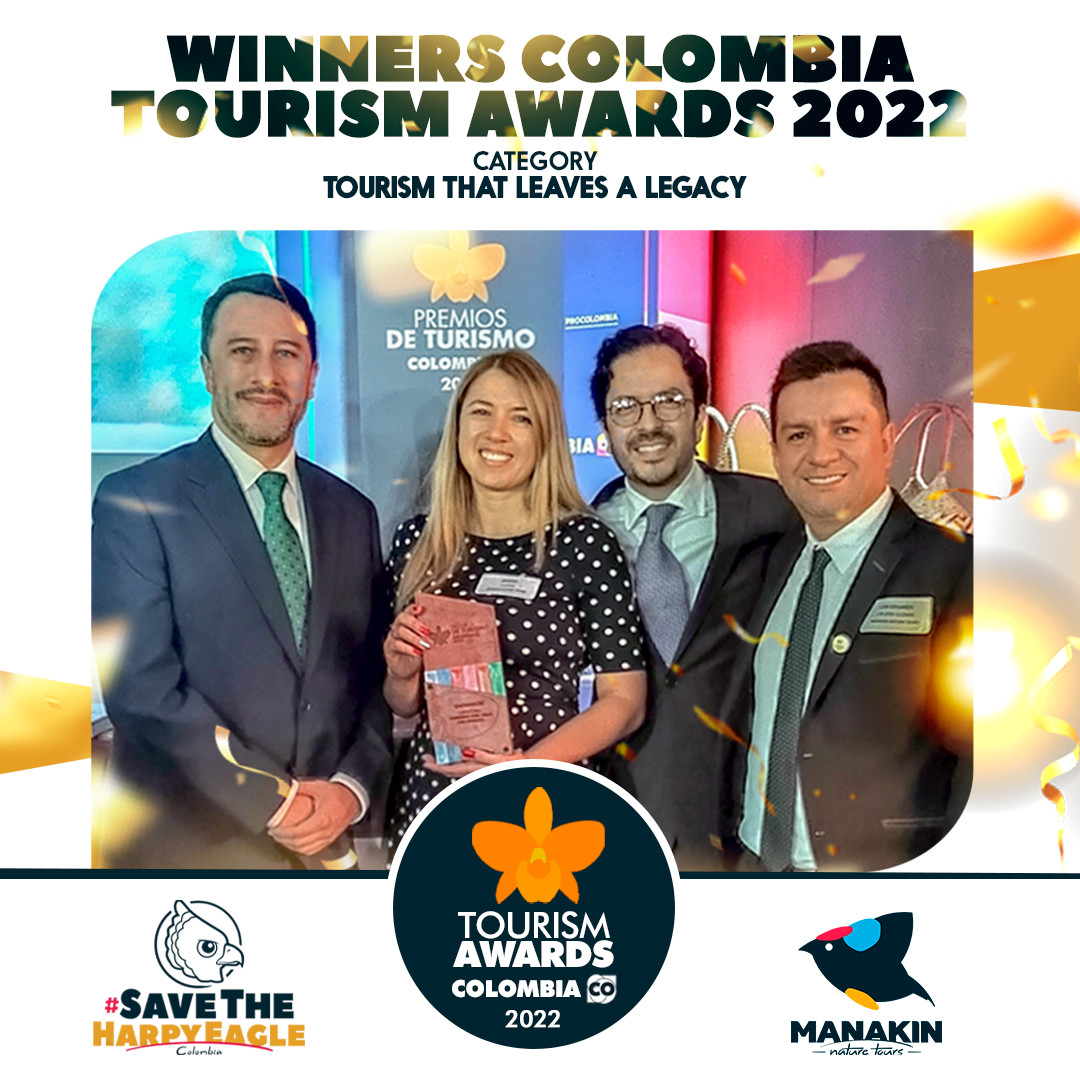 I SAVE THE HARPY EAGLE, Tourism, Community and Conservation – COLOMBIA TOURISM AWARDS 2022

“Manakin Nature Tours, won the Colombia Tourism Award 2022 in the category Tourism that leaves a Legacy, with the project I SAVE THE HARPY EAGLE, Tourism, Community and Conservation” 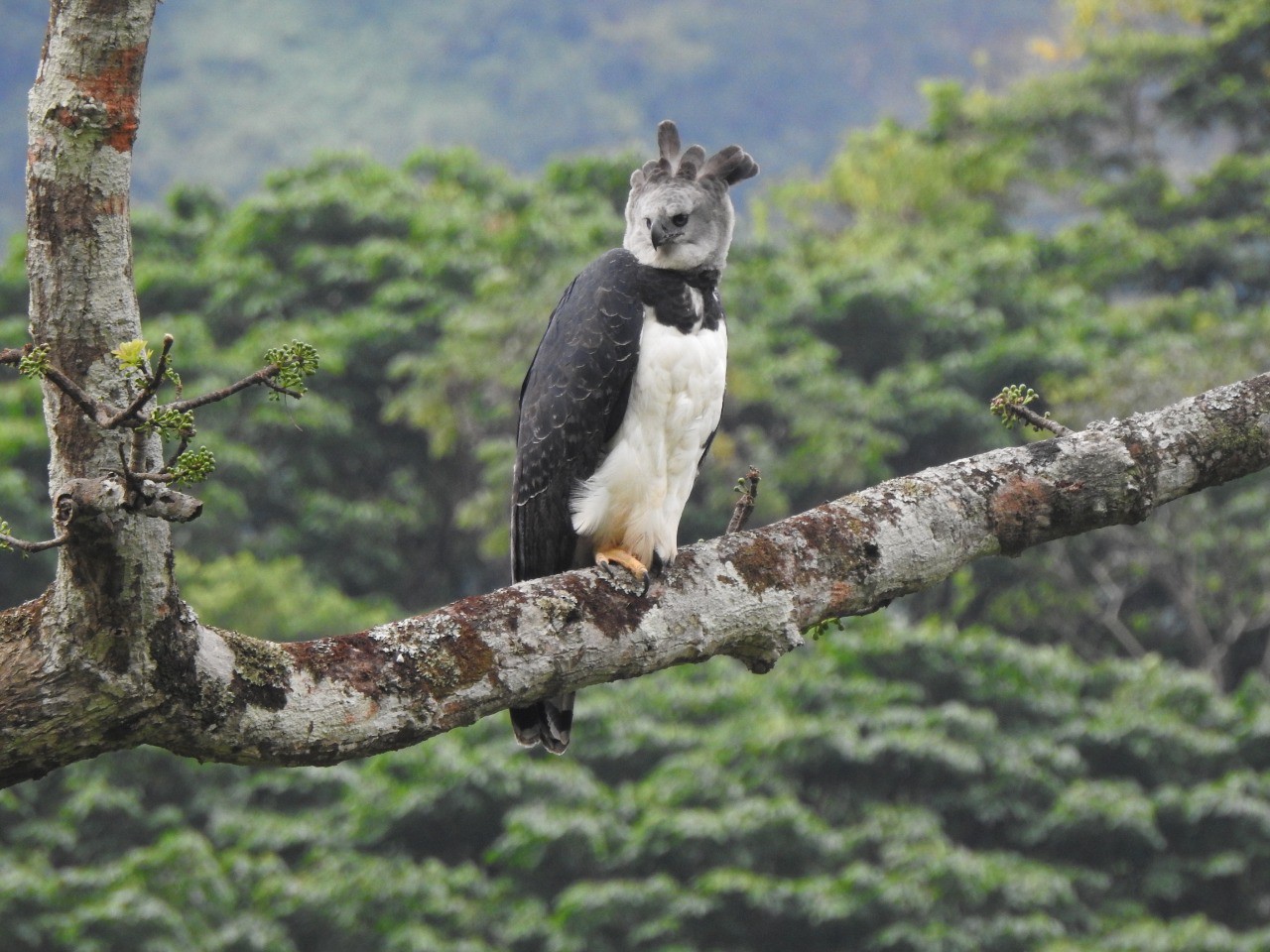 What legacy will we leave as visitors to our emerging destinations? This is one of the most important questions that Manakin Nature Tours asks itself every day; that we seek as a company to apply daily in our actions to promote our country and our destinations. Tourism aims to generate a positive brand for the country, especially for its emerging destinations, new routes, and especially communities!

Generate a value chain for nature tourism with good practices and with communities seeking alternative means for territories that were affected in the past! by violence, which did not allow sustainable, social, and economic development! This is the challenge of the project that we are currently developing in the Vistahermosa – Meta region, we are not just saving an   Eagle, we are trying to protect an entire social environment! 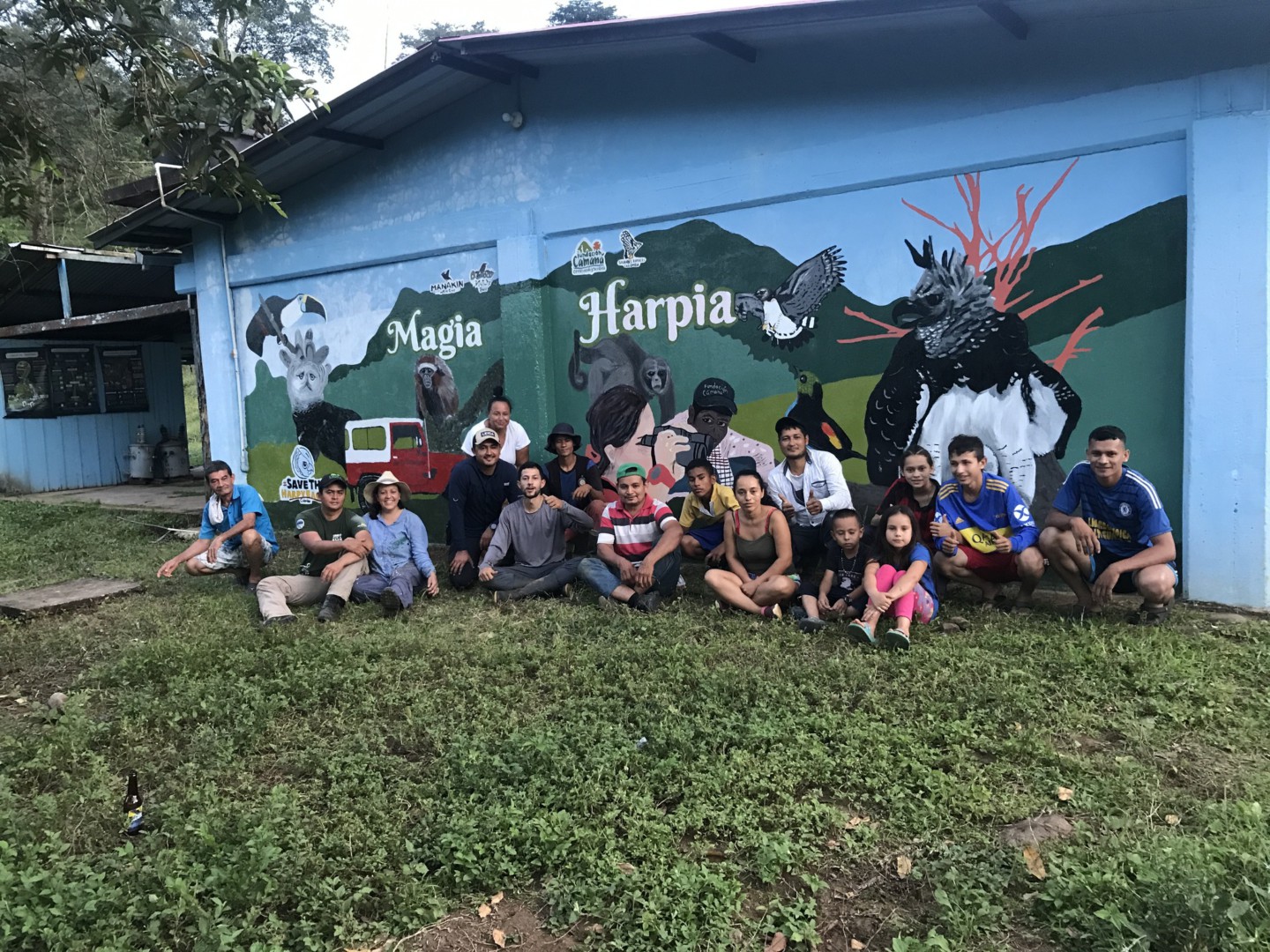 The Department of Meta, due to its geopolitical location as it is in the central region of Colombia, a space of transit and connection between the Andean center and the east of the country (PNUD Colombia, 2010), has been a place of reception for displaced persons from other territories, at the same time that it became a landscape, the continuous scene of armed conflict between the State, the groups outside the law, settled in this territory. The territorial dispute was initially based on political ideals, later it was transformed by the economic power of drug trafficking which had a great impact on the lives and memories of the population for a long time.

This municipality, Vistahermosa, has been marked by multiple violence caused by different armed groups, being considered a territory prohibited for decades to transit, during the dispute for territorial control, as well as by the drug trafficking business, which on the one hand raised inputs for illicit enrichment and infrastructure improvements in the territory, but at the same time brought minefields, displacement, sadness, pain, and insecurity.

In the case of Vistahermosa (Meta, Colombia), something particular happened. Young people were more vulnerable and exposed to losing their lives due to exposure to violent actions brought about by the war. What left traumas in individual, family, and social relationships, which in their oral narration show a load of fear and distrust that, in the face of social denial and lack of justice, have led the population to despair and subsumed in injustice.

Thus, Tourism plays an important role, as a tool to transform the old scenarios that these territories experienced, seeking to resignify their relationship with nature and with social relations!

But how is tourism developing in the region? On the last day of 2021, Manakin Nature Tours receives a message from one of our local guides: a possible active nest of one of the most important eagles in the world: Harpy Eagle!, a species that at the beginning of 2022 had less than 100 records of sightings throughout Colombia on the eBird platform (the main bird registration platform carried out by bird watchers in the world), a bird vulnerable to extinction and which, when it was possible to identify an active nest of this eagle, due to its rare behavior of Using large areas of the primary forest becomes essential to start developing responsible community tourism in this place, conservation actions and even more education and social appropriation!

From this context, in the first days of January 2022, Manakin Nature Tours, carried out an expedition to validate the confirmation of the nest and the nest had a chick a few days old (in the ornithology of the neotropical, this is a very important event, it is like finding a rare jewel of nature); during our visits, we spoke with a member of the community and with the people who had found the nest, to our great surprise this was not the first nest that they had already identified, but other nests in other areas that unfortunately ended in tragedy, because the birds They had been killed because they did not understand the importance of these species and because of the human-animal conflict as this species is a predator of some domestic animals! 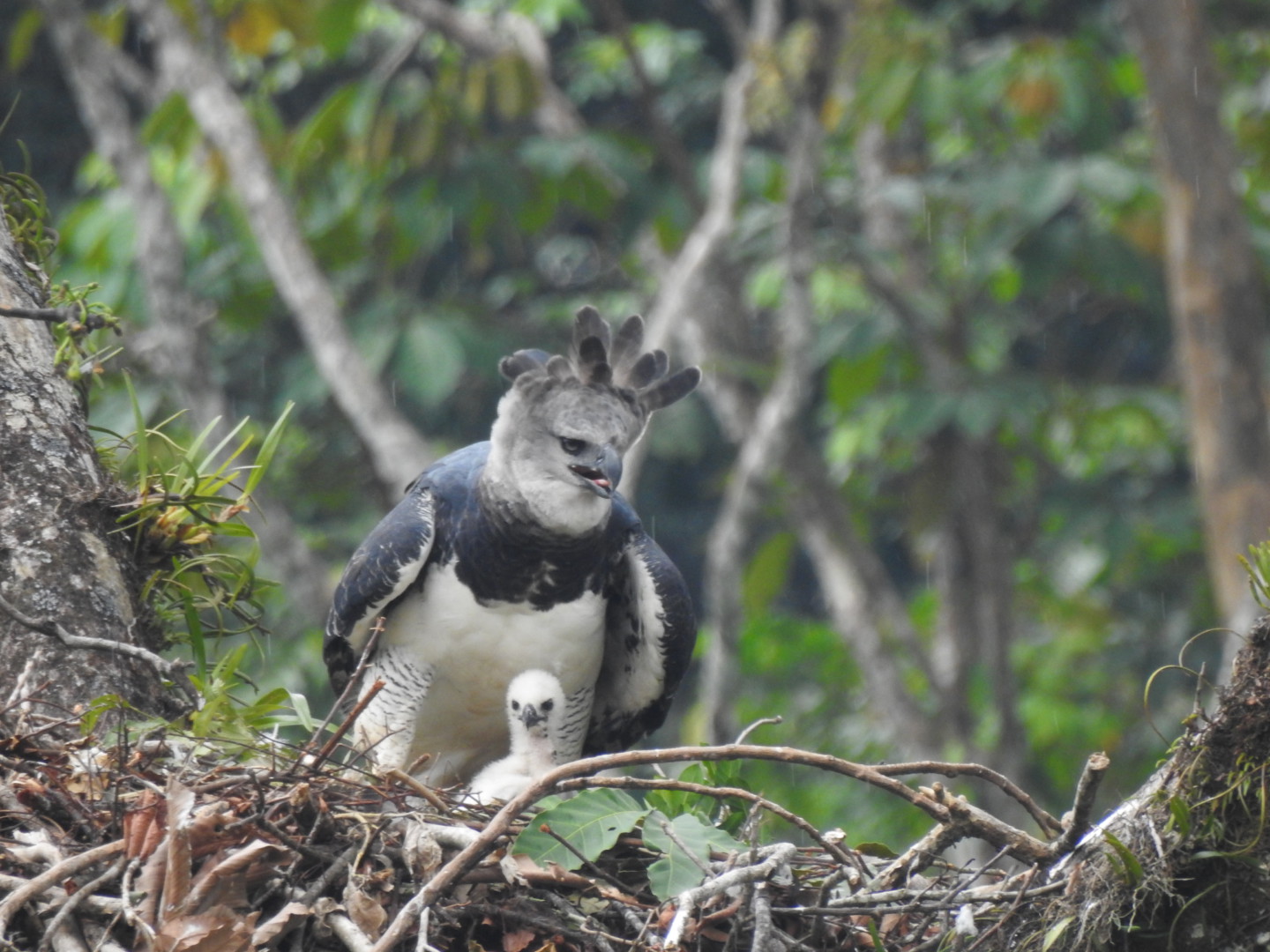 This scenario was what we found ourselves in, a community that distrusted any new project, any new idea, that by not understanding the importance of conserving nature, of this eagle and the nest, could lose a great opportunity to generate resources, to educate themselves and to find new paths for the development of this territory.

We started our project by holding a meeting with the community, presenting our ideas and proposals for forest conservation, and carrying out a community tourism campaign to raise funds for the purchase of the 80-hectare farm where it was located. the nesting site; We make videos, blog articles, and different publications on websites of international bird tourism operators and NGO projects, to obtain the necessary resources, thus we managed to reach a large ornithological community in many parts of the world interested in helping, not only the Harpya but also to this vulnerable community. In June 2022 and after a great communication campaign, we obtained the necessary amount to buy the farm where the nest is located! It is with great joy that we finalize the property purchase process and thus begin our projects with the community!

One of our great alliances to develop work with the community was the Camaná Foundation based in Restrepo – Meta, with them, we started workshops to raise awareness in the community about the importance of community and sustainable tourism, the workshops were held in June, August and September, with which we began to empower the community to protect the birds, the eagle, the ecosystems, develop tourist services and train in it. 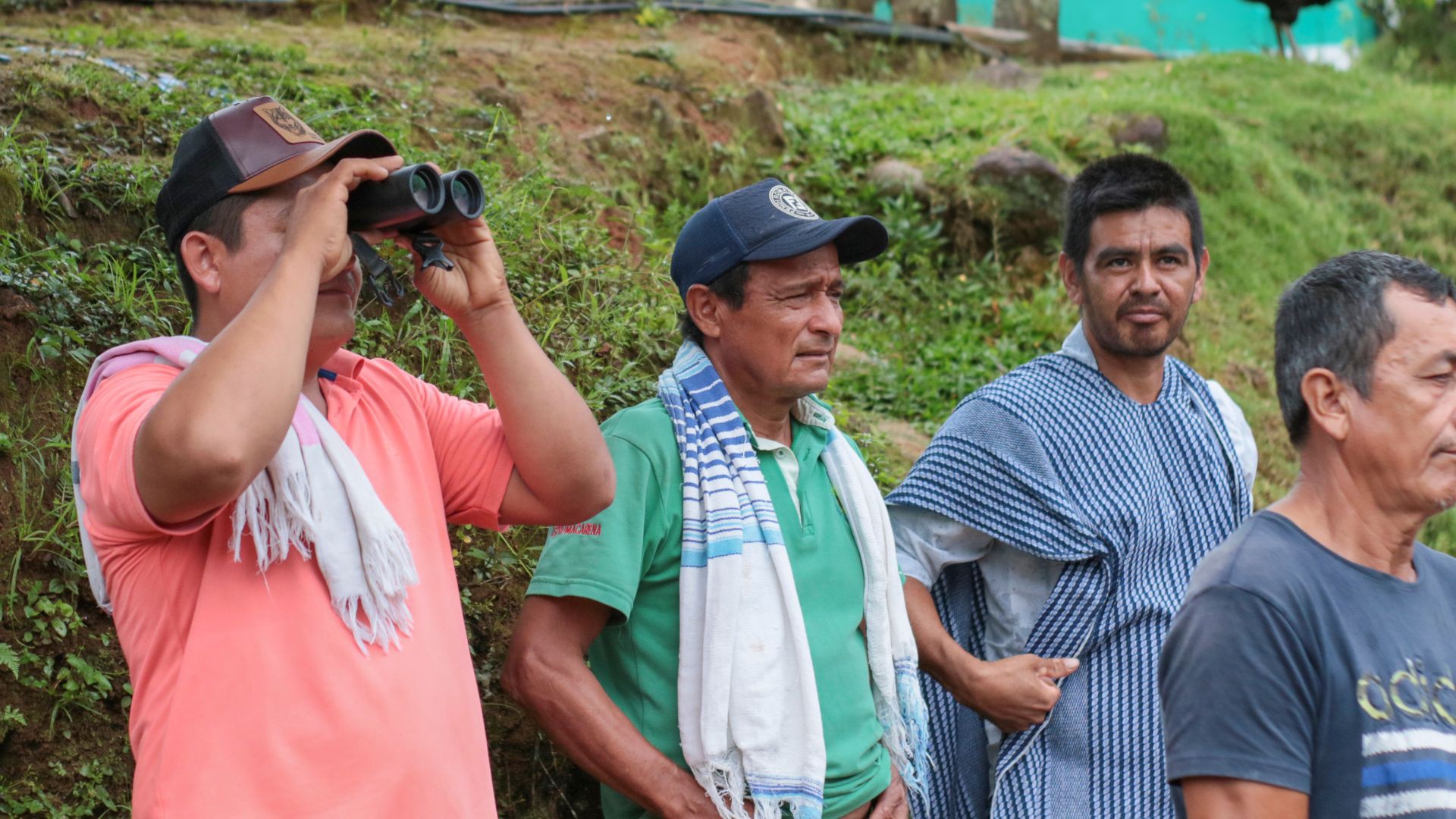 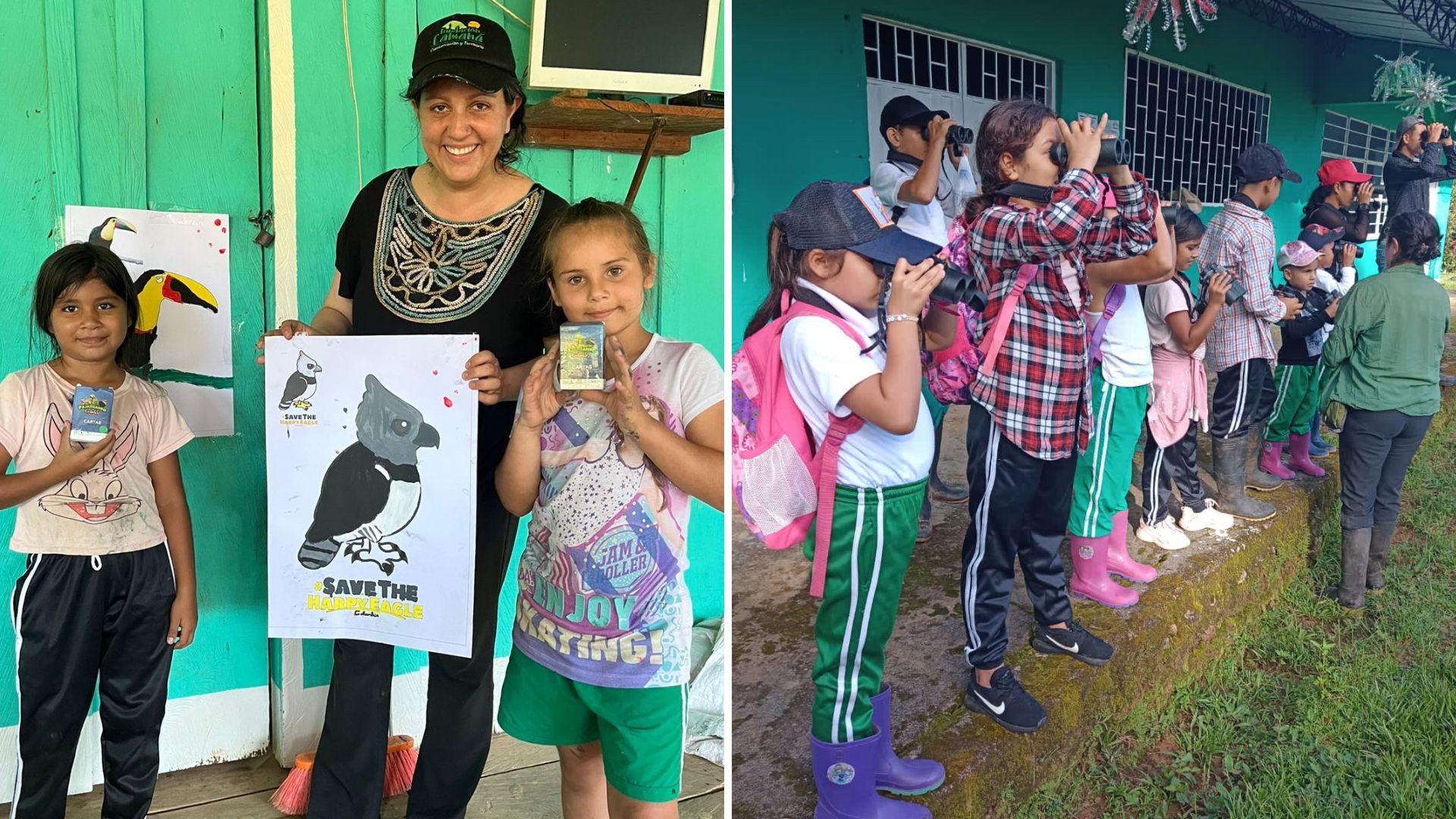 In July of this year, we presented a talk about the project, community tourism, and conservation of the Harpy Eagle at BirdFair UK, as a tool to promote a new route for bird watching in Colombia, which immediately began to attract the attention of the largest birdwatching market in the world. 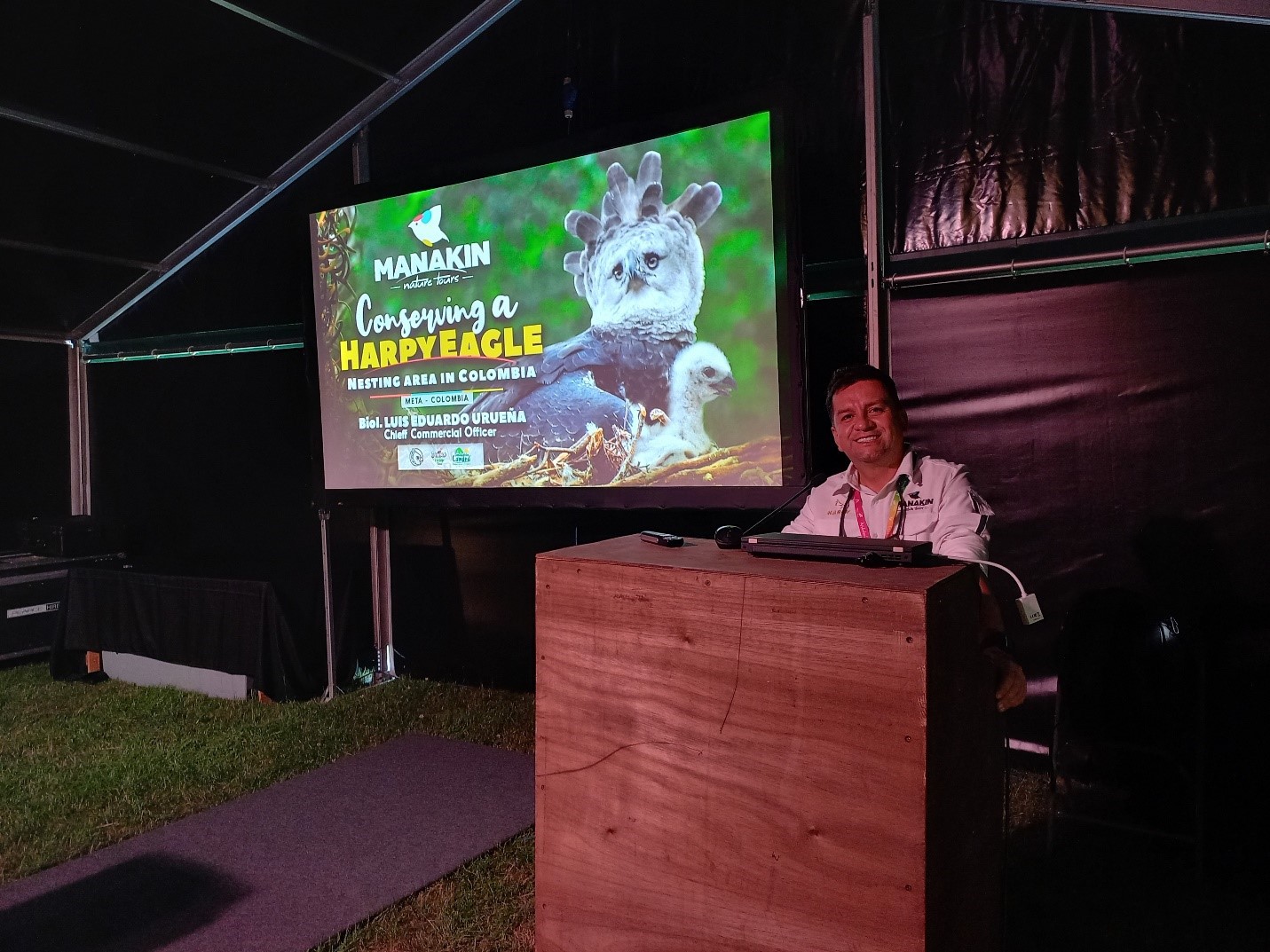 Based on these actions, we began to promote the new tourist route to observe the Harpy Eagle, we made our first tours with national and international bird watchers, and it was a unique experience to see the community get involved with community tourism and take ownership of their destinations. and cultures! Some with the horses, others with food, others with the accompaniment; Seeing national and foreign tourists in this place gave back a little hope to its residents, and now many are thinking of new ideas and projects on how to improve the services in the place.

To date, we have held 3 workshops focused on knowledge of the species, nature conservation, and ecosystem importance, in which 40 community members participated, mostly community leaders from the Alto and Medio Guapaya villages, young farmers, and kids. 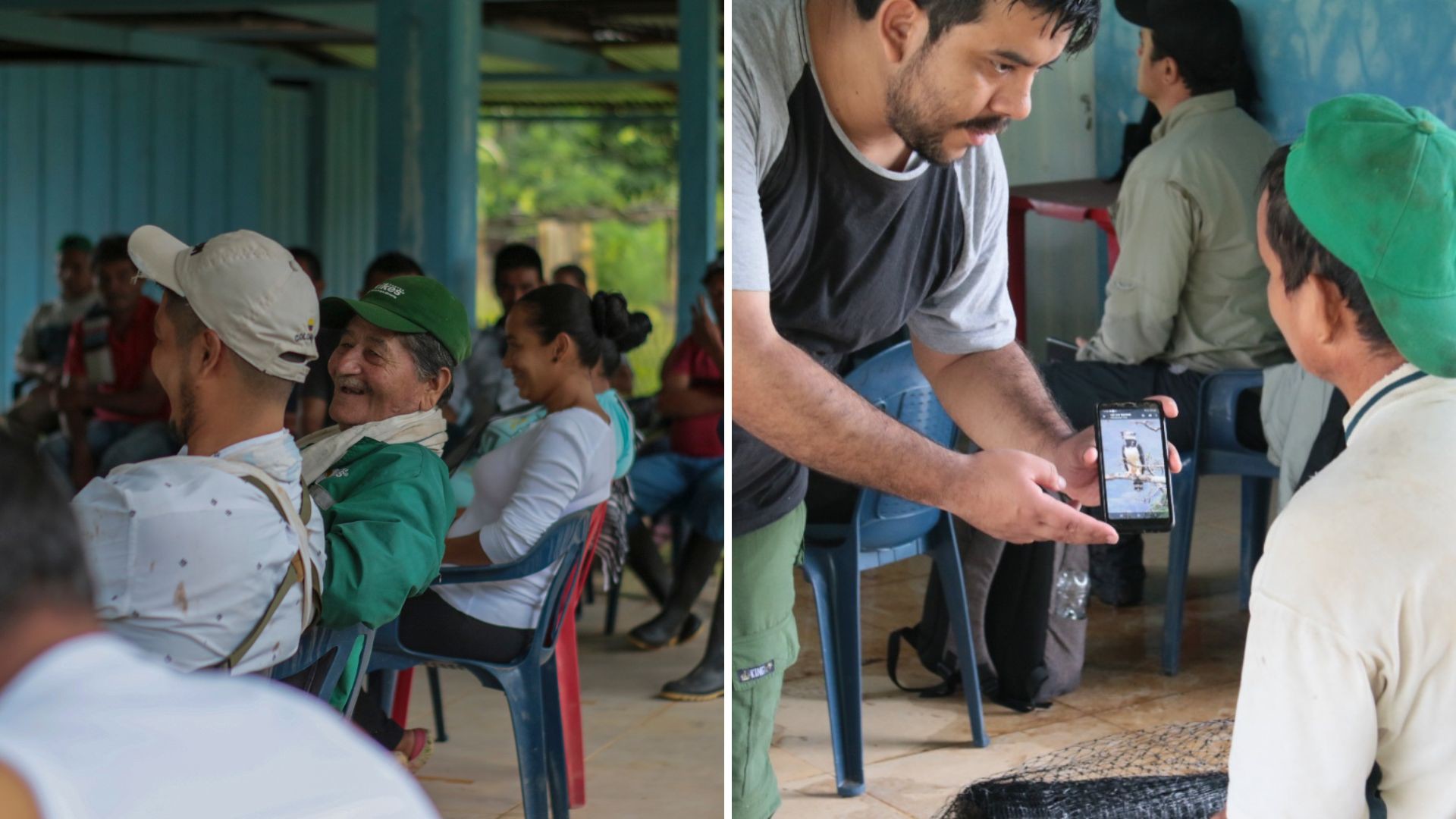 Today Manakin community tourism, together with our allies like Fundación Camana, and Orinoco Nature Tours is promoting this social and sustainable transformation in this new emerging destination! With this new project that we are developing, we seek territorial peace and show new perspectives for the youth and members of this beautiful region of Colombia. We still have a long way to go, but little by little we will involve more members of the community and we will save many more eagles, birds, forests, and the hope and illusions of the people who live there.

The fourth version of the Colombia Co 2022 Tourism Awards highlighted, in 11 categories, the various industry players who, through their leadership, inspire and transform the way of doing tourism in Colombia.

For ProColombia, “tourism is being the protagonist in the construction of total peace, through community participation and the redefinition of territories. For this reason, the Colombia Tourism Awards Co are a recognition and an encouragement for all the people, companies, and institutions that are making this industry an engine of social transformation”.

And with this project, we managed to be awarded the COLOMBIA TOURISM AWARD 2022, or the greatest recognition award for tourism in Colombia! It was a great emotion for everyone, being able to see great results with our actions together with allies! Thank you to everyone who helped with your donations to this project! We are all very excited, we are doing our best to promote our territories and biodiversity.

We are very happy with this great moment for the conservation of the Harpy Eagle and to development of Tourism in this beautiful part of our country! 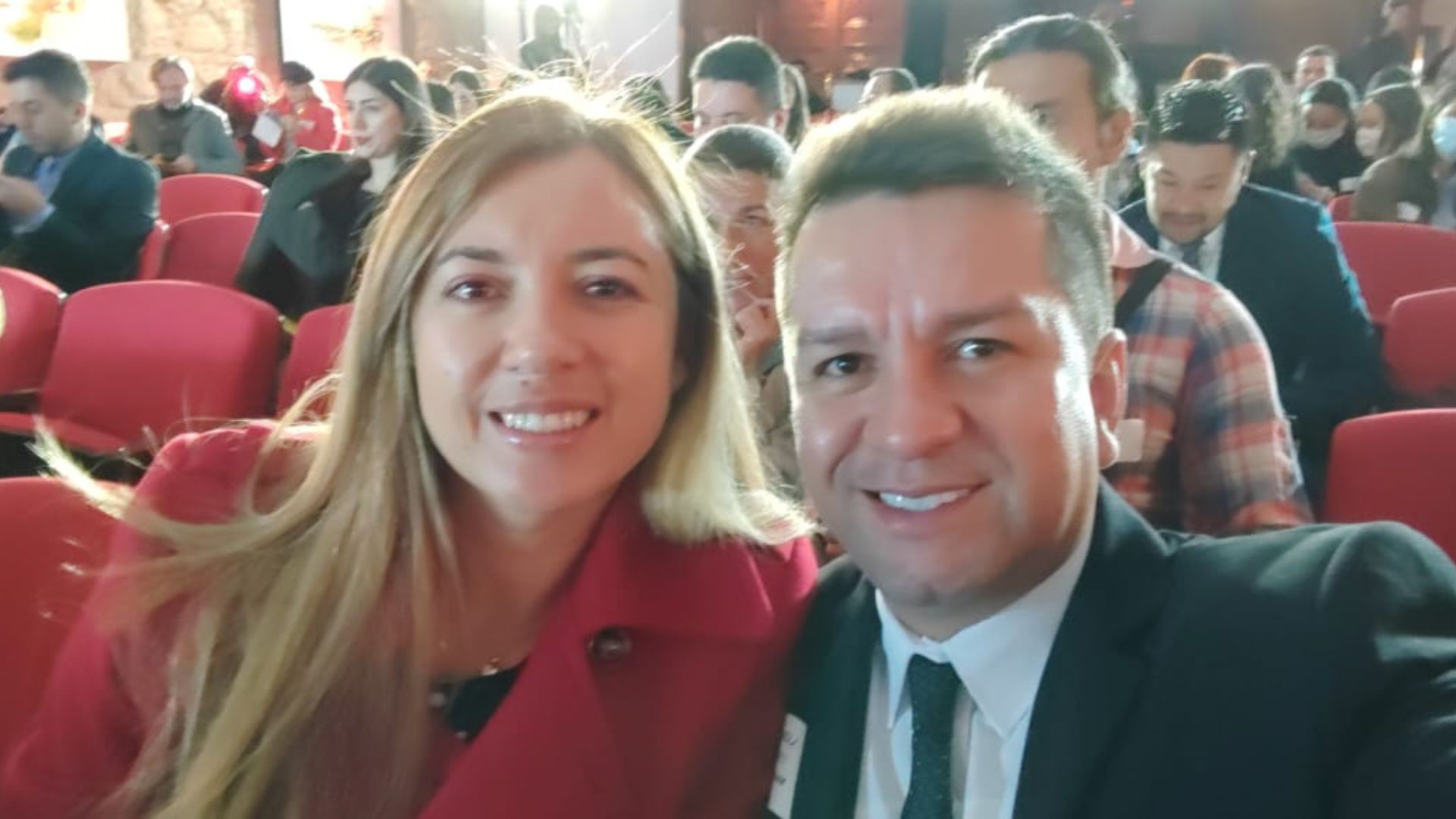 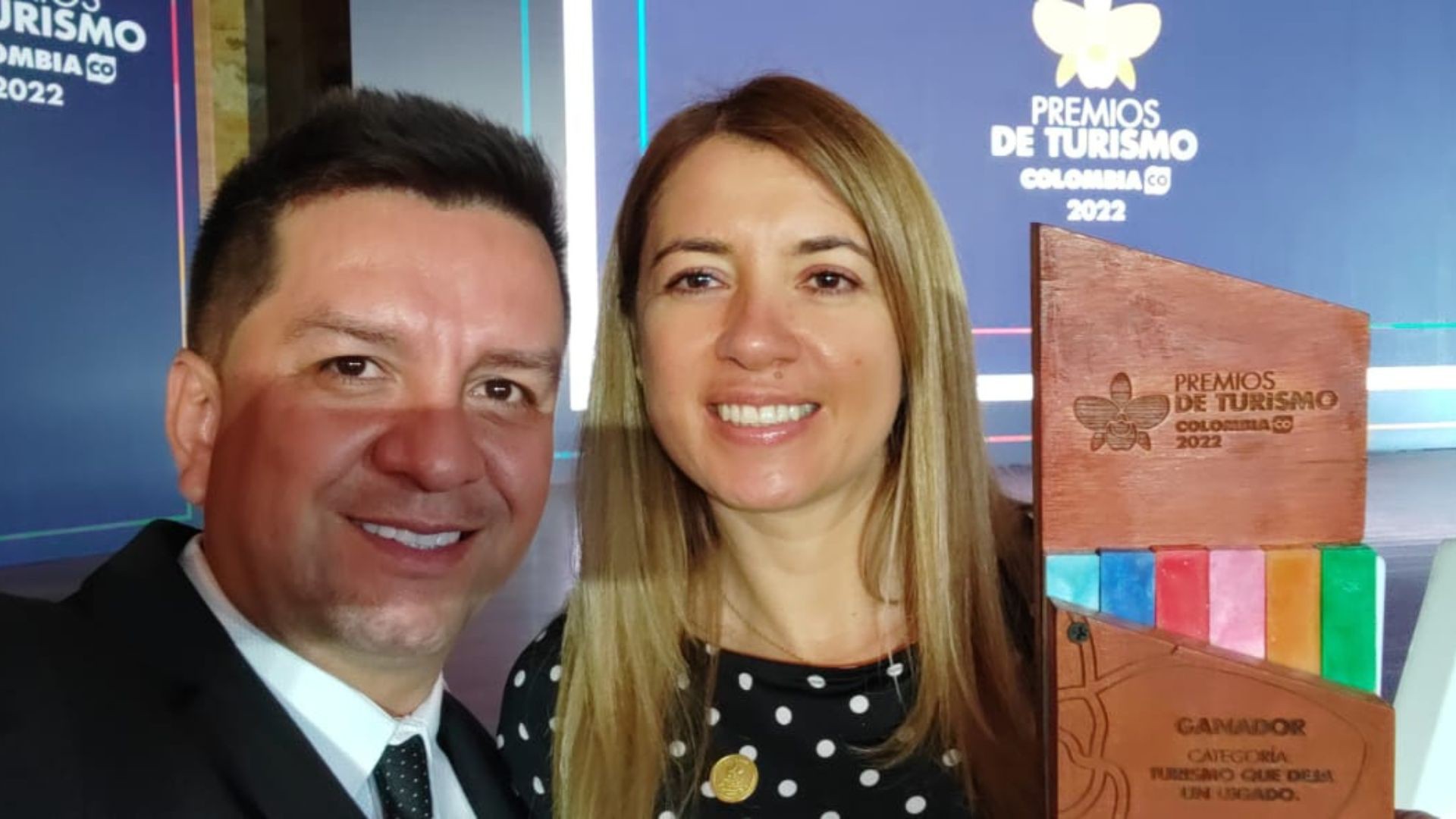 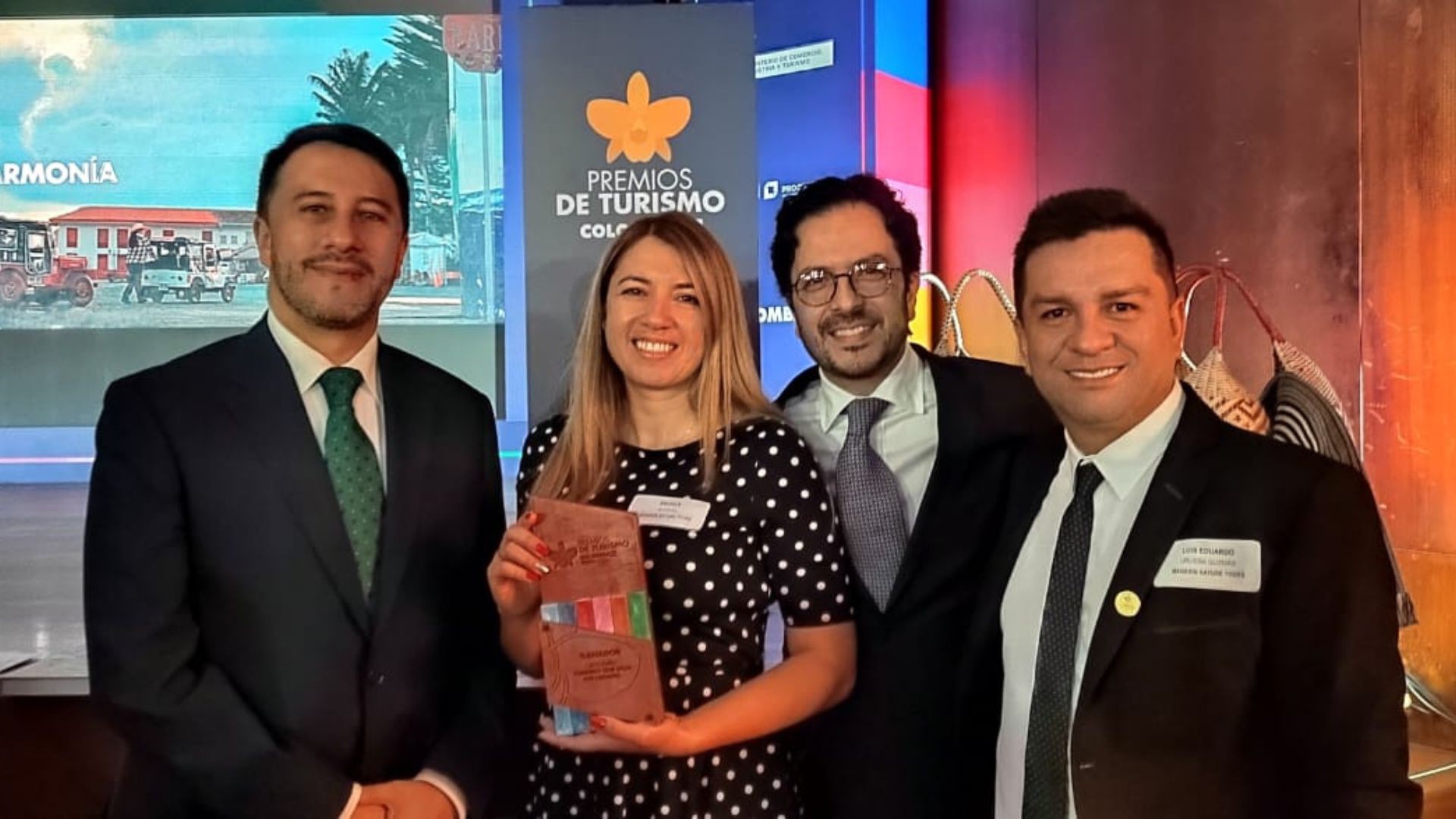 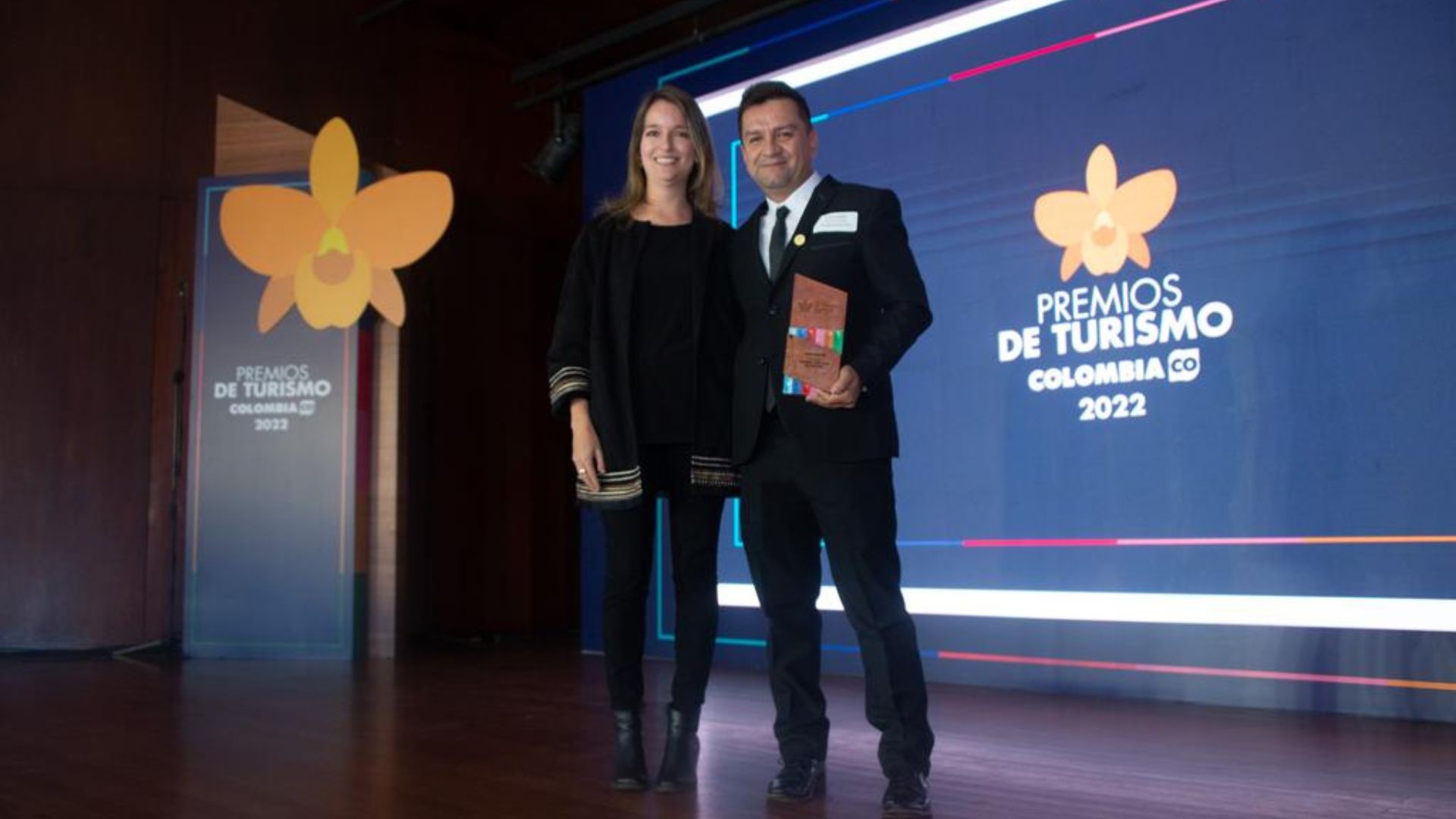 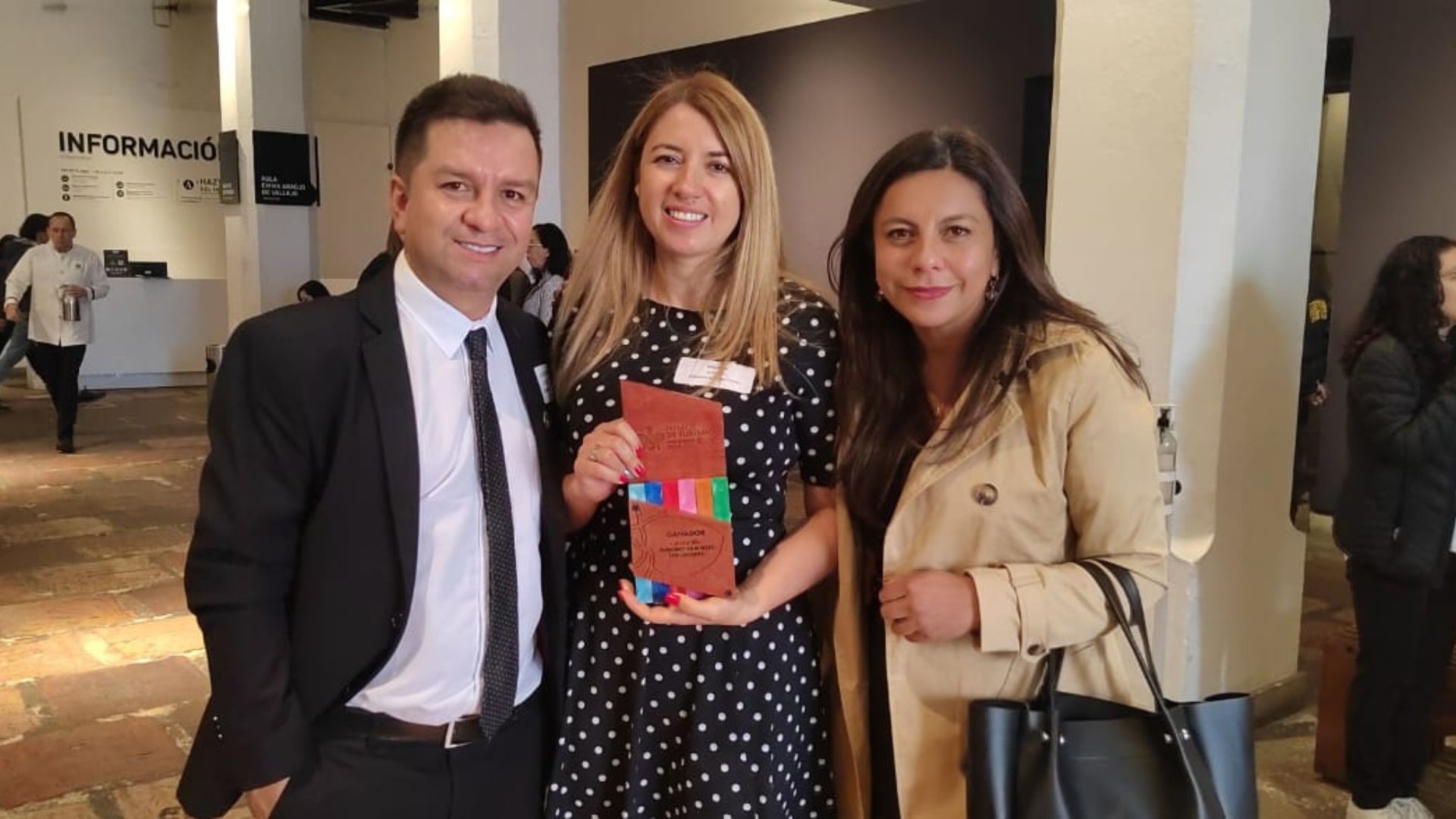 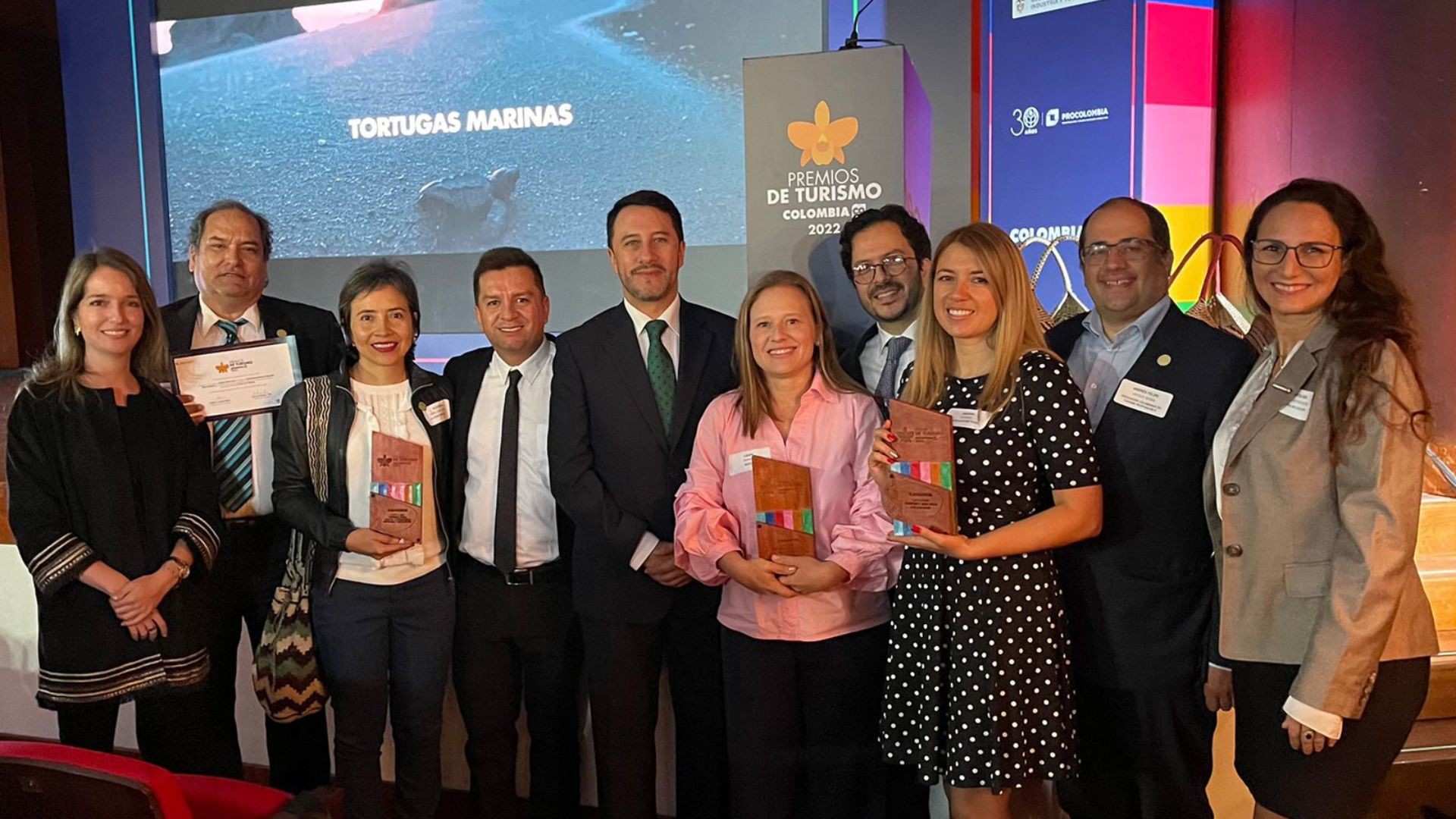 Thank Procolombia for promoting and encouraging tourism in Colombia! To all our partners, customers, and friends who always trust Manakin Nature Tours, we are finishing this year with this important tourism award! You can be sure that by 2023 we are working hard to continue offering the best birdwatching service to our customers and promoting our country!