Cristian is a 28-year-old country-raised young man who fell in love with birds when he was 8 years old and that moves with his life story, very particular and dignified to count.

He was born in Pereira, on December 23, 1990 (that’s why will never have two dates to receive gifts), has 2 brothers Juan, who works as an administrator of a coffee farm & Camilo who is still in school and is the spoiled child of the house. His mother Luz Mary a strong and hardworking woman (single mother) works in a fish farm that produces trout in the Otún river, Rio el which its waters move this story.

His story begins at the age of 5 when Cristian lived at Casa Verde in what is now known as the OTÚN-QUIMBAYA FAUNA AND FLORA SANCTUARY, its Dad, Edgar Daza, worked as a ranger for the Inderena (National Institute of Natural Resources Renewables and Environment) where he lived for 5 years and was always in contact with nature, the I remember as a child seeing the Red-ruffed Fruitcrow perching on the fence of his house and sometimes seeing the Mountain cross through his backyard, and although this always impacted him, in those His early years never had someone to introduce him to the wonderful world of nature.

Unfortunately Cristian’s parents separated and although to this day, Cristian all he knows about his father is who lives in Chile; the only good thing that I leave this separation was a great collection of books which included field guides for butterflies, orchids and Steve Hilty’s famous Colombian bird book that It was made for the year 1986, however his mother filed with great suspicion and he could not take them, but one day Cristian with a tool in hand managed to open the closet where they were kept and took out without permission from his mom (with a big smile says she has no regrets) the book of the birds of Colombia, taking it all to the school where I enter an ecological group called “Los Congéneres” and where he used to be the most popular for his bird book. Like no one in the group knew about birds, the children of this ecological group what they did was just try to compare what they saw with the book and hope sometimes correctly and sometimes not, that the bird they were seeing was the one they saw in the book; this empirical birding lasted about 3 years.

At the age of 11, when he entered the “Hector Angel Arcilla” school, Cristian made part of a group of real bird watchers, “Grupo de Observadores de Aves Las Aguilas” who was led by his school  eacher William Carvajal; The curious thing about this is that the group “Las Aguilas” was founded in 1992, and some of his uncles (and all older men) were part of it, and he only found out until a few years after being a professional birdwatcher.

Cristian says that when he entered the group Las Aguilas were 30 children who belonged to this, he had to demonstrate to continue there, he really liked the environment and birds so he had to meet several Requirements: 1. have good grades in school; 2. go birdwatching every Saturday and 3. one day a week I had to go to the school’s playful workshops, where the main activities were to paint the birds they saw last weekend, review your field notes and organize your data in a very artisanal way.

They spent all the years of school in this practice of going out to observe birds, of their group of 30 children who they entered the Eagles in 2001 they only finished 5 in it; However, during that time he not only learned from birds and nature, but also became head and monitor of the group the bird eagles, and taught others younger children about the birds of the region. 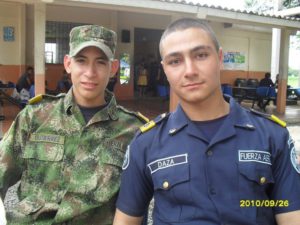 When he finished his schooling, Cristian had no the slightest idea that could be made of birdwatching (actually no one in Colombia he knew this), after he finished school he left to study environmental administration in the city of Pereira, a career that only lasted 2 semesters being forced to give up because at 18 he had than going to do his military service; an uncle who was retired from the air force enlisted him in the force and gave him two options: to start school  in the air force and military career as an option for life or that he would simply render his service and if He liked to stay and if he didn’t, he retired; so it was for 1 and a half years from where you remember that you never had access to binoculars, however he also remember that from the military base he could see birds like the Crested Bobwhites, they crossed the airstrip, and You could see Woodcreepers, Tanagers and Flycatchers while keeping watch from the observation tower. When I finished my military service, in January 2011, Cristian returned to his land in the Rio basin. Otun, and entered the university again, joining the group of bird watchers at the University Tecnológica de Pereira, however, after 2 semesters he withdrew from the University again (the university did not it was for him).

“During all these years, Cristian never had his own binoculars, they always shared 1 pair of binoculars that the group Las Águilas had, remember that they were Tasco Rubicon “

In 2012 he headed to the city of Manizales where he began working in a hostel with some friends, there they started a tour operator called “Taiyari Trips” with which they sold trekking tours in the los nevados park, sometimes they rarely found birdwatchers (backpackers) along the way; he recalls that his first birding client was a lady named Molly McDermott from the

The USA with whom he first saw the Crescent-faced Antpitta, one of the most enigmatic birds in Colombia.

The tour operator, although it worked for more than a year between tracking and birding, (which helped a lot to learn English because all the time I was in contact with foreigners) unfortunately I fell completely, given the strong volcanic activity of Nevado del Ruiz and one due to a possible eruption, for which the business of the hostel and its small operated hill.

He and his group of friends decided to go and try their luck in another place, in the town of Salento, a friend told them offered a cabin to start a new hostel, but it turned out to be a farm in total abandonment that for 6 months they repaired to start their new project, but it seemed that fate did not want this to be the case, because after a big storm, the access road to his new project was completely destroyed and they could not continue with their idea of ​​the hostel, which again caused him and his friends to return home again in the Otún River, where fortunately the Yarumo Blanco Community Association who it was just beginning to emerge, he welcomed it.

In Yarumo Blanco, he began to meet many more bird watchers and other tourists, there I work as environmental interpreter for colleges and universities, but were not yet able to offer the observation services of birds because it was not prepared; however when groups of bird watchers began to arrive company professionals, Manakin Nature Tours, a Colombian bird tourism company, gave him the opportunity for them to participate as an observer and interpreter of these groups of observers professionals, something that made Cristian fall in love with this activity even more and he thought about making it his way of life.

“The first species of birds that Cristian saw in his life and that made him fall in love with the world of birds was the Red-headed Barbet, that’s why his personal email is eubucco. “

Emanuel was born on October 18, 2014, a son he has with Paula Ramos, who is the daughter of one of the best friends of the father; Cristian says that Emanuel has become the person with whom he has made his dreams come true childhood dreams, such as going out to take photos, to see birds – with binoculars – for a walk, to enjoy nature, etc., he tries to be the pope that he always wanted for him but abandoned them when he was very little.

For 3 years, Cristian worked hard with the Yarumo Blanco Community Association where he became vice president of this organization, this one, has won multiple awards, among which the PRIZE NATIONAL OF SUSTAINABLE TOURISM, in the modality of BENEFITING LOCAL COMMUNITIES, which has made that at this time Yarumo Blanco is one of the most important community environmental organizations important parts of the country and key data for the development of the Andes route of AUDUBON SOCIETY in Colombia.

In 2015, Santiago Escuceria, a local birdwatcher, gave Cristian some new Vortex binoculars 10×42 with which he was able to improve his technique and could according to “see much more”; in 2016, one of the most important bird birds of the country, I invite Cristian to be part of the MANAKIN NATURE company TOURS, as a guide in training for said company, having the fortune, that the first tour in which was as an auxiliary guide was a group of ROADSCHOOLAR – HOLBROOK TRAVEL; after that, Cristian began to travel with other groups and other guides of this company with whom he learned quickly and became I become the following year the payroll guide and the main guide for this company; now works as Tour Leader Y Co-Leader for some of the most important companies in the world and with some of the most popular ornithologists recognized today, such as Steve Hilty, Jesse Fagan, David Ascanio, Mitch Lessinger, among others.

Already as a professional Manakin guide, Cristian has obtained specialized training in first aid, customer service and tourist guidance, has also participated in high-level operational training quality that HOLBROOK does for its local operators in Central America and has had the opportunity to represent your company in events such as the ASIAN BIRDFAIR in Korea, and participate in workshops and other activities that have enhanced his capabilities and made him one of the important bird guides in the world country.

“Cristian is currently a coach of the training courses for AUDUBON in COLOMBIA on the route of the Central Andes and permanent guide of MANAKIN NATURE TOURS and HOLBROOK TRAVEL. “

Cristian is part of the Risaralda ornithology group, and also from a group of artists (Cristian with photography) with who are developing a responsibility project environmental social that seeks to sponsor young and talented low-income artists by selling t-shirts and visual material made by themselves, which will provide scholarships for these young people with few opportunities.

Cristian is a great example of life, a child who started in the world of bird watching without permission taking out a guide of the birds of Colombia that her mother jealously guarded, who had their first binoculars given away after 13 years of being in love with birds and that he is now one of the guides most recognized in the country and one of the promises of the guide Birdwatching in Latin America Ornithology South America.